Around this time of the year—his birthday was 21st October—people gather at various locations around the world for a Celebration of Mind, to enjoy the legacy and interests of renowned man of letters and numbers Martin Gardner (1914-2010). There is still time to attend or host one this year!
For a quarter of a century, from 1956 to 1983, Gardner wrote an extremely popular and influential monthly column called "Mathematical Games" for Scientific American. Last year here, we marked the passing of this intellectual giant and prolific writer with two selections of mathematical card tricks and entertainments—in his own words—from books 1-4 and 7 & 10 of the resulting 15 collections. This time, we sample further expositions on the topic from books 5, 11 & 12 of the series.
Incidentally, these books can be enjoyed in full, text searchable form on a CD-ROM available from the MAA called Martin Gardner's Mathematical Games. Some of Martin's more famous columns from those years are accessible now at MAA Online. Personal reminiscences of the man (and more) can be found here.
The crystal clear words in italics below are all Martin's, but the section headings are our own.

Chapter 14 of The 6th Book of Mathematical Diversions from Scientific American (1971) is called "Mathematical Magic Tricks." After describing a trick with pennies devised by Jack Yates, Martin writes:
The following, contributed by the British magician Norman MacCleod to a magic magazine in the United States, The New Phoenix (No. 328, August, 1955), is one of the best. While someone deals the deck into four bridge hands the performer writes on a slip of paper: "There will be 22 face-up cards." This prediction is folded and placed aside. The spectator takes two of the piles, the magician takes the other two.
"I have selected a number from one to ten," says the performer. "I shall turn that number of cards face up in each of my piles." He proceeds to turn some cards face up but without letting anyone see how many.
The spectator is asked to do the same with his two piles: choose a number from one to tell and reverse that number of cards in each pile. The four piles are assembled, the deck spread and the face-up cards counted. There are 22. The prediction is unfolded and found to be correct.
To perform this trick you must cheat a bit. Any even number between 13 and 30 can be written in your prediction. This number, minus 13, tells you the total number of cards to leave face down in your two packets. In this case 22 minus 13 is 9, so you reverse, say, all but 5 cards in one pile and all but 4 in the other. Put your two piles together and one of the spectator's piles on top. Hold this large packet in your left hand and ask the spectator to cut his remaining pile into two parts. While attention is focused on the cutting casually turn over your left hand, thus secretly reversing all its cards. This large pile is sandwiched between the two halves of the cut pile.
All the cards are now together again and presumably no one knows how many of them are face up. Do you see why there must be 22? The procedure reverses 13 cards in the spectator's two piles for the same reason that Yates's coin trick works. The 9 cards you left face down are now face up, making 22 in all. The trick can be repeated using other even numbers in the prediction. Odd numbers should be avoided because the procedure, if it is done legitimately, could not produce an odd number of face-up cards.

In his book Knotted Doughnuts and Other Mathematical Entertainments (1986), following a discussion of the Birthday Paradox and variations, Martin writes:
Another simple demonstration of an event that seems improbable but actually is not can be given with a deck of playing cards. Shuffle the cards, then deal them while you recite their names in a predetermined order, say ace to king of spades followed by the same sequence for hearts, clubs and diamonds. The probability that a card named in advance, such as the queen of hearts, will be dealt when it is named is 1/52, but the probability that at least one card will be dealt when named is almost 2/3. If you name only the values, the probability of a "hit" rises to 98 percent, or very close to certain.
(Another Martin Gardner inspired 98% likely "hit"—which is also related to the Birthday Paradox—can be found in Better Poker Hands Guaranteed, the June 2006 Card Colm.)

In his book Time Travel and Other Mathematical Bewilderments (1988), Martin has a terrific chapter on non-transitive paradoxes. In this exposition of an amazing and counter-intuitive phenomenon, he included this card implementation:
Many paradoxes of this type were jointly investigated by Leo Moser and J. W. Moon. Some of the Moser-Moon paradoxes underlie striking and little- known sucker bets. For example, let each row (or each column) of an order-3 magic-square matrix be a set of playing cards, say the ace, 6, and 8 of hearts for set A, the 3, 5, and 7 of spades for set B, and the 2, 4, and 9 of clubs for C. Each set is randomized and placed face down on a table. The sucker is allowed to draw a card from any set, then you draw a card from a different set. 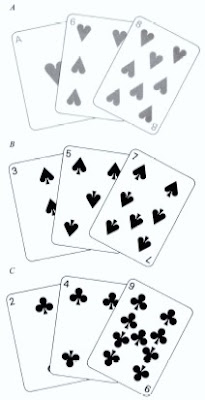 The high card wins. It is easy to prove that no matter what set the sucker draws from, you can pick a set that gives you winning odds of five to four. Set A beats B, B beats C, and C beats A. The victim may even be allowed to decide each time whether the high or the low card wins. If you play low card wins, simply pick the winning pile with respect to a nontransitive circle that goes the other way. A good way to play the game is to use sets of cards from three decks with backs of different colors. The packet of nine cards is shuffled each time, then separated by the backs into three sets.


Be There and Be Square

The "Combinatorial Card Problems" chapter from the same book contains a wealth of material to be explored with a deck of cards. As Martin observes,
There is no end to the making of mathematical tricks, puzzles, and other recreations that employ playing cards. In this chapter we look at some new card problems and games, with emphasis on how they lead into significant areas of combinatorial theory.
Consider the following combinatorial way of dramatizing an important number theorem. Remove all the cards of one suit (say, spades) from a deck and arrange them in serial order from ace to king. (The jack, queen, and king, respectively, represent 11, 12, and 13.) Place them face down in a row with the ace at the left. The following turning procedure is now applied, starting at the left at each step and proceeding to the right:

The high card wins. It is easy to prove that no matter what set the sucker draws Inspect the row. Note that all the cards except the ace, the 4, and the 9 are face down. These values happen to be square numbers. Is this an accident? Or is it an authentic hint of a general rule? A good classroom exercise is to prepare 100 small cards bearing numbers 1 through 100, stand them with their backs out in serial order on a blackboard ledge and apply the turning procedure. Sure enough, at the finish the only visible numbers will be the squares: 1, 4, 9, 16, 25, 36, 49, 64, 81, and 100. That is too large a sampling to be coincidental. The next step is to prove that no matter how large the deck, only squares survive the turning procedure.

How does this apply to the row of cards? Consider the eight of spades in the first card-turning example. Since 8 is not a square, it has an even number of divisors: 1, 2, 4 , 8 . It will be turned four times: when you turn each card, each second card, each fourth card, and each eighth card. An even number of turns applied to a face-down card will leave that card face down. Since every nonsquare card will be turned an even number of times, it will be face down at the finish. The only cards that are turned an odd number of times and left face up are those with an odd number of divisors, namely the squares. Is there a better way to teach this basic number theorem in the memory of a high-school student than to have him witness such a demonstration?
Don't forget there is still time to Celebrate the Mind—his and yours!—in 2011, with card or other entertainments. Have fun!
Posted by Mathematical Association of America at 3:00 AM No comments: